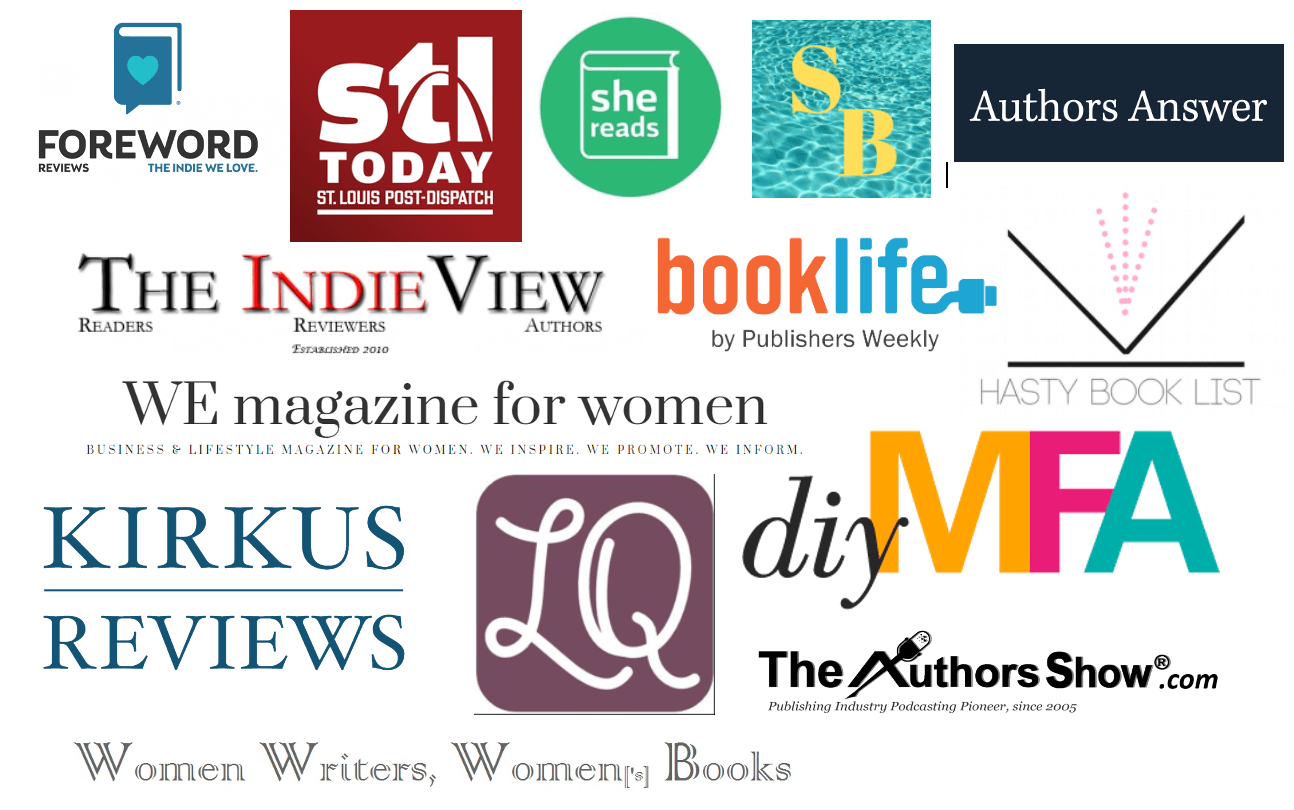 Linda was interviewed in Hippocampus. Read the interview →

Linda was interviewed on The Culture Buzz. Listen to the interview →

Linda was interviewed by Authors Answer. Read the interview →

The Indie View featured a Q&A with Linda. Read the Q&A →

Deborah Kalb featured a Q&A with Linda. Read the Q&A →

Literary Quicksand included Ivy Lodge in their list of “What We Read in April 2022.”

She Reads included Ivy Lodge in their list of “Indie Book Club Picks for 2022.”

Foreword Reviews included Ivy Lodge in their “Book of the Day Roundup.”

WE Magazine for Women included Ivy Lodge in their list of “Summer Books Work Reading.”

Following the deaths of her parents, a translator returned to her family home to sort through their possessions in this debut memoir.

In 1959, when Marshall was 9 years old, she and her siblings were taken by their parents to visit Ivy Lodge. Erected in the 1860s and rebuilt in 1939, this Tudor-style manor in Kirkwood, Missouri, would soon become their home. Forty years later, the author, a translator working in over a dozen languages, was tasked with returning to the house to sift through its contents prior to its sale. Marshall’s parents did not believe in throwing things out, and she found herself confronted by a “mausoleum of memories.” Many of the objects reminded her of the difficult relationship she had with her parents. She discovered a peanut jar used by her mother to shame the children about the number of calories they consumed. The brass knuckles owned by her father, who worked for the FBI during World War II, left her with a sense of foreboding about his unknown past. Employing her skills as a translator, Marshall started to reinterpret the objects to glean a deeper understanding of herself and her family. The author’s imaginative, elegant prose beguiles from the outset: “The home had been dropped on top of our…personal Rubik’s puzzle—our family—shattering it in the process.” Marshall takes a curatorial approach, examining many objects in detail and then allowing their histories to unfold. Regarding an unfinished piece of embroidery, the author writes: “Loose, unknotted threads extend off the top of the piece—perhaps intended to be a bookmark—as though it had been left behind when its owner departed in a hurry.” Marshall has a great eye for fine details, and even seemingly insignificant items are loaded with meanings that are waiting to be unlocked. Some readers may misconceive the premise of the memoir as cloyingly sentimental. The author sidesteps this pitfall with her often brutal honesty: “I’m…searching this home for anything that is evidence of my parents’ love for me.” Thoughtfully conceived, this deeply personal, acutely observed recollection is a captivating voyage to the past. Readers who are mourning parents will particularly relate to the story.

A moving, courageously frank, and sharply intuitive account about a manor filled with memories.

Ivy Lodge is a resonant memoir that looks beyond the “opulent facade” of a mid-century family’s stately home.

Built in the 1800s, Linda Murphy Marshall’s childhood home bore the distinguished name “Ivy Lodge.” In 1960, Marshall’s father purchased this suburban St. Louis Tudor home for a “bargain” price: wealthier white residents were leaving the neighborhood to avoid racial integration. Though the home provided ample space for Marshall and her siblings, it was also somewhat drafty and dysfunctional, leading to a “somber spirit.” Family displays of affection were infrequent; happier moments were undermined by Marshall’s father’s angry outbursts and her mother’s passive-aggressive tendencies.

The book exhibits empathy for Marshall’s parents, noting that her father grew up during the Great Depression and had little opportunity to enjoy his own childhood. Marshall’s mother fulfilled conventional expectations as a busy, resourceful housewife, yet she also seemed to harbor secret resentments about the demands and limitations of her role. And because she was exuberant by nature, Marshall herself was often rebuked for being too needy. Her mother mocked and criticized her for gaining weight; both parents belittled Marshall’s later accomplishments.

Going through each room of Ivy Lodge following her parents’ deaths, the book represents a singular process of healing. Then married and with her own family, Marshall chose to “rescue” less valuable items from the house that held personal significance. Using her skills as a multilingual translator, she found new meaning in these quirky objects—“stand-ins” for the emotions her parents “didn’t—or couldn’t—express.”

Many of Marshall’s memories still carry a certain pain, even with the passing of time. However, in her collective portrait of Ivy Lodge and those who lived within it, she creates a compassionate whole, narrated in the acquired language of forgiveness.

A tour of a home, a family, and a life, Marshall’s accomplished, incisive memoir takes as its organizing principle a trip through the eponymous Ivy Lodge, the somewhat regal but “funeral” Tudor that her family purchased in 1960. Linking the purchase to the white flight that reshaped greater St. Louis and other American cities, Marshall, a translator, conducts a moving survey of the home, her familial relationships, and her own understanding of who she is—and, in the process, at last “stop viewing my life through the arbitrary lexicon my parents devised.”

Marshall has made a life, as a translator, finding and explicating the truest of meanings; here, she applies those exacting skills—and her considerable acumen as a prose stylist—to what Miranda Lambert calls “the house that made me,” as well as the people in it and the “cracks in our foundation that no one could fix.” As her story moves through the tumult of the 1960s and the years beyond, with Marshall often feeling herself to be ostracized onto the fringes of the family, Ivy Lodge finds her moving through this memory-haunted home, room by room, centering chapters on the rathskeller basement, the bedrooms (“fancy, impersonal, like showrooms of a model house before it’s occupied”), and the attic that reached from the “curving wrought iron stairs ascending from the foyer.”

Her portraits of family and accounts of conflicts (occasionally explosive, often quietly simmering) prove as striking as her descriptions of her beloved dolls, her father’s toy soldiers, and Ivy Lodge’s lofty gables. Even with such highly personal material, she proves a persuasive, perceptive analyst of the “Murphy dynamic.” Despite the pain of often being made to feel, even as an adult, as if she were unwanted—her mother regards her like she’s a “rare form of beetle under a microscope”—Marshall arrives at touching moments of empathy for the family as she sorts through it all.

Takeaway: A touching reckoning with a family, a home, and one’s place in both, in elegant prose.

The first time Linda Murphy Marshall saw Ivy Lodge, she was 9 years old, on a trip with her parents, sister and two brothers to view the family home in Kirkwood that would shape much of her childhood.

The last time she saw it, the visit that sparked an insightful memoir, she again joined her three siblings, after the deaths of their parents, to sort through family belongings and probe memories — some pleasant, some hurtful, all contributing to the woman she had become.

And as she reviews her life — room by room, object by object, memory by memory — “Ivy Lodge” becomes a sometimes painful, always poignant review of experiences that led to the writer and translator she is today. After the Murphys moved the three blocks from her earlier home on Gill Avenue in 1960, Marshall’s life was shaped by her family, her experiences and her surroundings.

When someone says “You can’t go home again,” they mean that returning to a certain place rarely turns back time the way we hope. In Linda Murphy Marshall’s new book Ivy Lodge: A Memoir of Translation and Discovery, the narrator examines her surroundings with an eye toward understanding the cultural forces at work: the challenges her parents felt as they recast themselves as nouveau riche, the family dynamics that drove her older brother to fight in Vietnam, and the struggles she endured as the eldest daughter (the third of four children) as she tried to fashion herself into what was expected of her. Murphy Marshall also reflects upon the shifting class and racial tensions of white flight in 1960s Missouri, her bright mother’s lost opportunities, and the complicated realities of her parents’ romance.

An early image in the book describes an unprompted gift from her parents to the adult siblings: a lithograph of their familial home (the estate mentioned in the title), commissioned from Walter DuBois Richards, a popular commercial illustrator famous for his many stamp designs. Later chapter names even follow the general floor plan of the stately home, with each vignette devoted to some object or impression related to a specific room.

Two themes that I’m drawn to as a reader and writer are family and place. Ivy Lodge: A Memoir of Translation and Discovery by Linda Murphy Marshall (She Writes Press, 2022) combines both elements in an examination of factors that shaped the author. Through easy-to-read prose, Marshall analyzes her parents and her childhood although she doesn’t spend much time evaluating her current life. The latter is one of my only criticisms of the book.

Marshall’s father bought Ivy Lodge, a “regal-looking Tudor home” on an acre of land, at a low cost after the Brown v. Board of Education Supreme Court decision that ruled racial segregation in schools is unconstitutional. In her community of Kirkwood, Missouri, schools are being integrated, causing “white flight” that makes real estate a bargain. The family moves to Ivy Lodge when Marshall is about 7 years old. She revisits the home in the Midwest after the death of her parents to settle affairs with the help of her three siblings.