A Memoir of Translation and Discovery 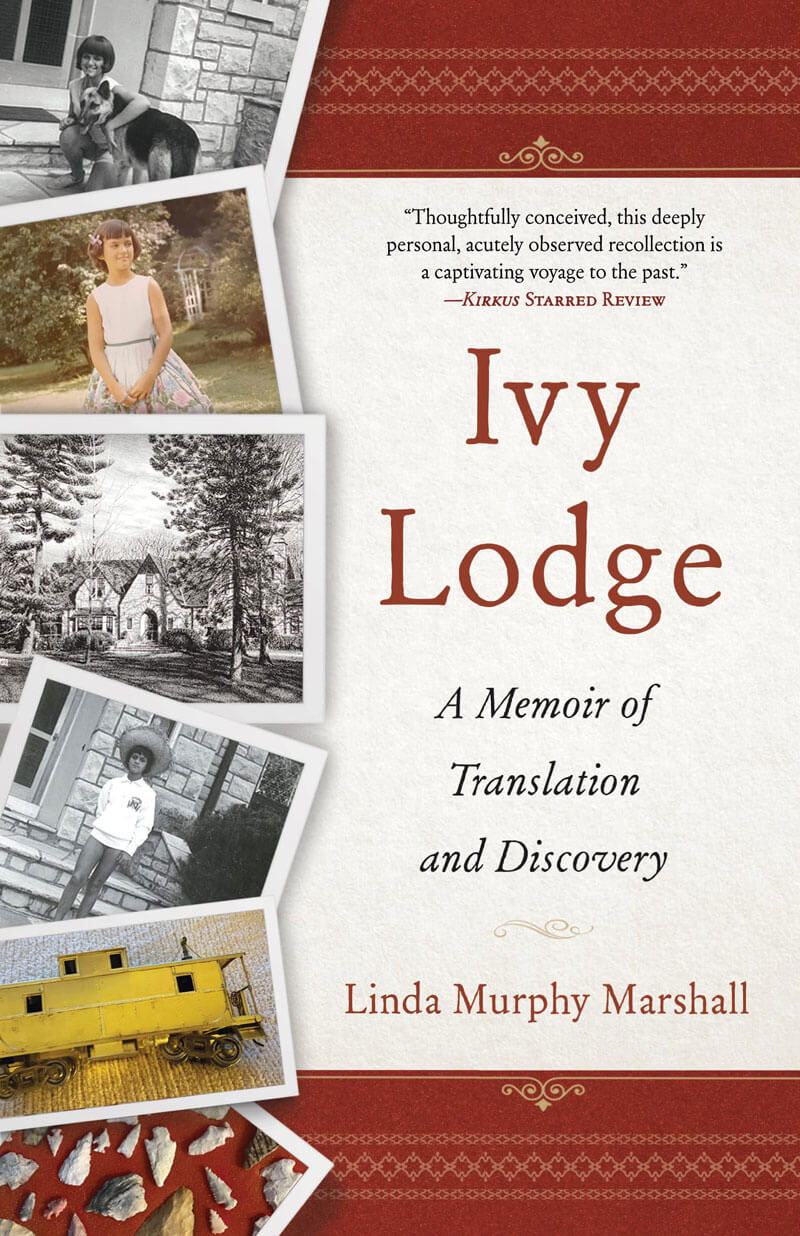 After both her parents die, Linda Murphy Marshall, a multi-linguist and professional translator, returns to her Midwestern childhood home, Ivy Lodge, to sort through a lifetime of belongings with her siblings. Room by room, she sifts through the objects in her parents’ house and uses her skills and perspective as a longtime professional translator to make sense of the events of her past—to “translate” her memories and her life. In the process, she sees things with new eyes. All of her parents’ things, everything having to do with their cherished hobbies, are housed in a home that, although it looks impressive from the outside, is anything but impressive inside; in short, she now realizes that much of it —even the house’s fancy name—was show.

By the time Murphy Marshall is done with Ivy Lodge, she has not only made new discoveries about her past, she has also come to a new understanding of who she is and how she fits into her world.

“The author’s imaginative, elegant prose beguiles from the outset…Marshall has a great eye for fine details, and even seemingly insignificant items are loaded with meanings that are waiting to be unlocked…Thoughtfully conceived, this deeply personal, acutely observed recollection is a captivating voyage to the past…A moving, courageously frank, and sharply intuitive account about a manor filled with memories.”  – Kirkus starred review

“Murphy Marshall uses her skills as a professional translator to decode everything left unsaid…Murphy Marshall’s intimate knowledge of language shines through…Murphy Marshall is a clear-eyed raconteuse, translating her early life faithfully while preserving the mysteries of her family’s first language  – silence.”
—Los Angeles Review of Books

“Marshall’s accomplished, incisive memoir….[H]er considerable acumen as a prose stylist…[H]er portraits of family and accounts of conflicts …prove as striking as her descriptions of her beloved dolls, her father’s toy soldiers, and Ivy Lodge’s lofty gables…..[S]he proves a persuasive, perceptive analyst of the ‘Murphy dynamic’….a touching reckoning with a family, a home, and one’s place in both, in elegant prose.”
— Booklife

“Translation, at its essence, is the rendering of one into another. That is the guiding force behind Ivy Lodge, one woman’s return to a childhood home and the secrets within. Triggered by the deaths of elderly parents who hoarded artifacts from a lifetime of collecting, Murphy Marshall journeys deep into the labyrinth of memory, perception, and the shapeshifting forces of identity. Room by room, object by object, she examines the detritus of a troubled family past to excavate the meaning of home and restore the narrative of a self she thought she had lost. A beautiful debut.”
–Harrison Candelaria Fletcher, author of Presentimiento: A Life in Dreams

“Using translation of languages as a metaphor to search for the meaning of family relationships, Linda Murphy Marshall takes the readers on a journey of recollection and compassion to understand her parents. Ultimately, Ivy Lodge is a story of self-discovery through the language of love, written in elegant prose. It is an extraordinary book.”
–Allison Hong Merrill, author of Ninety-Nine Fire Hoops: A Memoir

“A comfortably white middle-class American family living in the Midwest: what could go wrong? No poverty or alcoholism, no racial discrimination or physical abuse: how could someone raised in such favorable circumstances emerge so wounded? Linda Marshall’s memoir takes us deep into the dysfunction of one such family. In intriguing detail, she examines how seemingly ideal conditions can result in a lifelong attempt to ‘translate’ parents’ actions into meaning. Many will relate to the lives it describes, prevalent and arguably influential in shaping our country’s social fabric as they are.”
–Chivvis Moore, Author of First Tie Your Camel, Then Trust in God: An American Feminist in the Arab World

“A resonant memoir that looks beyond the ‘opulent façade’ of a mid-century family’s stately home.”
— Foreword Reviews

“An insightful memoir…a sometimes painful, always poignant review of experiences that led to the writer and translator she is today.”
— St. Louis Post Dispatch

“ Through easy-to-read prose, Marshall analyzes her parents and her childhood… I’d recommend Ivy Lodge for anyone who wants to examine the language within their own family and to celebrate Marshall’s ability to explore her own life in the pages of this memoir.”
— Hippocampus Magazine

“A unique memoir triggered by the death of the author’s parents…an exciting recollection…a captivating journey into the author’s past…A deeply personal and honest account that captures the reader’s heart early on…This book is a masterpiece of social observation and self-scrutiny…Highly recommended.”
— Readers’ Favorite

“Ivy Lodge pulses with the elemental dynamic of family dysfunction and interpersonal isolation. Linda Murphy Marshall’s exploration of the ostentatious house in which she grew up peels back the psychic, cultural, and spiritual layers of one family’s particular, and divided, residence upon this earth. Our tribal blood both binds us and pits us against each other. Ivy Lodge brings that emotional paradox into a brilliantly sharp focus.”
–Sue William Silverman, author of How to Survive Death and Other Inconveniences

“With carefully crafted narrative, Linda Murphy Marshall has written the next great memoir about her painful and still-mysterious childhood. After both parents’ deaths, she returns to the family home, Ivy Lodge–a grand façade that shrouds the emptiness inside. She moves from room to room, examining distressing memories that stem from her emotionally detached parents. A multi-linguist, Murphy Marshall applies her considerable language skills to translate the dialogue that still echoes, ultimately accepting that some languages may be too intricate to understand. I highly recommend this first-time author and look forward to her next release!”
–Donna Koros Stramella, author of Coffee Killed My Mother

“Ivy Lodge is a brave, beautiful book about the unspoken language of family. Linda Murphy Marshall is unafraid of looking in the dark corners of her childhood home in order to find meaning, peace, and ultimately, light.”
–Dawn Raffel, author of The Secret Life of Objects